Two weeks have passed since the New Zealand government opened consultation on its proposals for this country’s new world-first farm-level emissions pricing system. DINZ has “deep concern” about the proposals’ impact on deer farming viability as they stand. 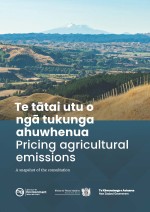 It’s a rapidly moving picture, but DINZ chair Mandy Bell has been encouraged by what she has heard in personal meetings, eyeballing top primary sector leaders and ministers, she told deer farming leaders in Wellington last week.

“There has always been a focus on the big picture and, for us, that is thriving economic viability,” Bell told the NZ Deer Farmers Association (NZDFA) executive and branch chairs.

She has been in regular contact with the DFA and 11 other primary sector leaders behind the scenes as a member of the Food and Fibre Leaders Forum (FFLF), chaired by former Special Agricultural Trade Envoy Mike Petersen. Each have given a commitment to work together constructively for the good of the whole sector. 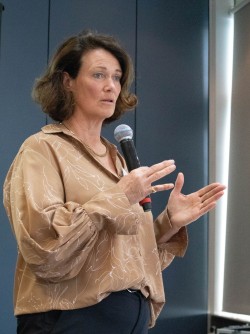 Behind those closed doors there is open and frank discussion – “much better than battling it out in the media” – which has left her encouraged, “way more than I thought I would be,” said Bell, who is primarily concerned about the long-term impact on deer farmers’ incomes.

“Our bottom line is to have a prosperous industry that is recognised for its great environmental performance.”

HWEN partners have been working together on a scheme to avoid the ‘stick’ – and unpopular – alternative, for agriculture to go directly into the Emissions Trading Scheme (ETS) by 1 January 2025 via a processor levy, as has already been legislated into place, should an alternative not be agreed.

Bell told the group her meetings with government and a range of ministers have reassured her that there is awareness of the pain and anger being expressed by farmers around the country.

“Positively, government has modelled the impacts on the primary sector and has highlighted the significant impacts on sheep, beef and deer which do not have the same opportunity for mitigation as dairy. All understand this. They get it,” Bell said.

“We’re now moving to a constructive space where we have to find solutions to economic viability and a just transition.” 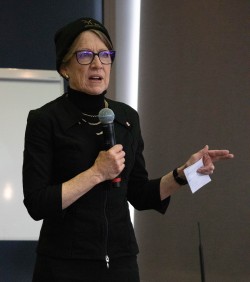 DINZ board member Jacqueline Rowarth: International imperatives are adding to the urgency.

International imperatives, including the fact trade agreements are now including greenhouse gas mitigation clauses – raising the spectre of barriers to trade being imposed on New Zealand exports – are adding to the urgency for government to get this right, noted DINZ board member Jacqueline Rowarth.

DINZ is reinforcing to policy makers what they have already recognised, Bell says.

“The farm price needs to allow businesses to remain economically viable until practical tools to reduce methane and nitrous oxide emissions from pastoral farming are available.”

Continue reading: GHG pricing: DINZ getting down to detail >>