Eight out of 12 new healthy food products launched in South Korea over the past six months used, and have been marketed as containing, New Zealand velvet. But, New Zealand has competition at its heels and must not become complacent.

DINZ has been working closely with key partners in the market, like the Korean Ginseng Corporation (KGC), to develop strategies for the new healthy food category including around Chuseok, the Korean harvest festival which this year falls in mid-September.

Newly launched products entering the market “demonstrate  the confidence of the big food companies in their market, many of which are now working to implement their Chuseok campaigns,” reports DINZ manager markets Rhys Griffiths. 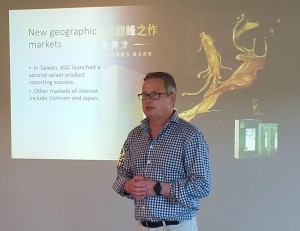 Griffiths updated velvet buyers with the latest market information during the recent VelTrak training session. “It was awesome to be involved and to reconnect,” he says.

DINZ chief executive Innes Moffat and Griffiths will travel to South Korea in late September. This will be Moffat’s first opportunity, in his new capacity, to personally meet the industry’s Korean contacts since the outbreak of the pandemic and get an understanding of the current market dynamics ahead of the new season. It will also be important to foster relationships in the important market, which currently consumes over half of all the velvet New Zealand produces.

Over 75 percent of the velvet ingredients used by the companies is from New Zealand, but competition from Russia is growing as its suppliers try to increase their market share. Two of the new products contained Russian velvet.

While historically dominating the traditional Korean market, Russian velvet has not made much inroad to date into the new healthy food category. However, Griffiths has noticed Russian velvet companies are now “upping the ante” promotionally and starting to develop a velvet ingredient brand.

While accessing Russian velvet “will have its complications” for Korean importers this year, “it’s not impossible,” says Griffiths. “But, I’m not concerned by that, I think it’s a natural evolution of the market.”

The beachhead advisor workshops being conducted with NZ Trade & Enterprise in the market are “helping New Zealand velvet connect better with Korean consumers,” he says.

Griffiths urges velvet producers to be prepared for the season operationally and also to maintain close contact with velvet buyers so they are “close to the signals buyers are receiving from the market.”

“We need to continually challenge ourselves. We cannot become complacent, because doing that will erode our market share faster.”